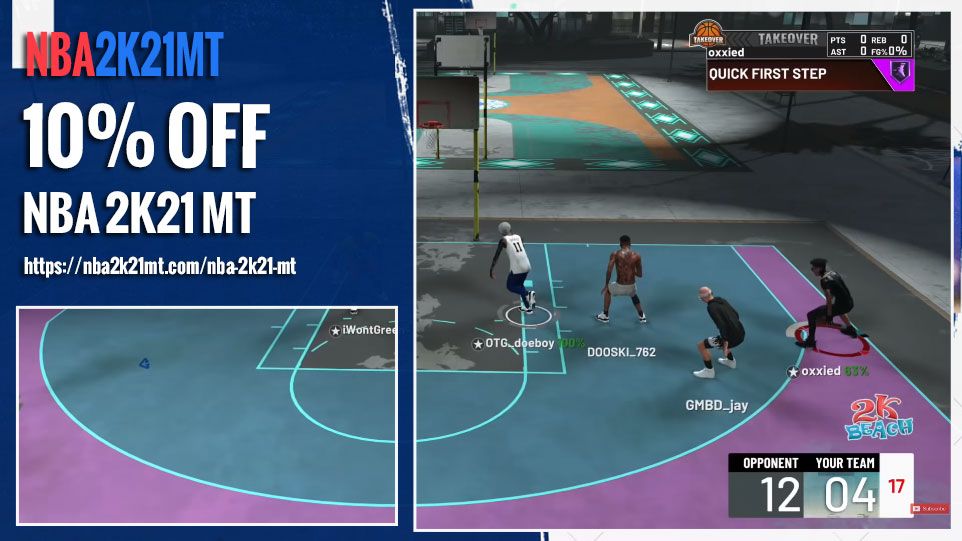 Currently, the NBA has shifted from post-up and inside scoring to a game predicated on 3-point shooting. Therefore, three-point shooting has become one of the most important aspects of the game. It’s not different in NBA 2K21; having a group of good shooters in the video game will give you an advantage over your rivals. Today, we’re going to take a look at the best 3-point shooters in NBA 2K21.

Despite an injury layoff and a woeful season for the Warriors, Steph Curry remains the man of the moment when it comes to the three-ball.

Curry led the NBA in three-point field goals made (4.9) and attempted (11.7). He is shooting 41.6% from beyond the arc. Not only is he above the standard, but he is efficient for the number of shots he is taking.

Arguably the best three-point shooter of all time, the Warriors PG has a maxed out 99 OVR when it comes to shooting from beyond the arc. Luckily, you can use the NBA 2K MT to unlock him!

Joining Steph at the top of the rankings for yet another year is his Golden State teammate – and fellow Splash Brother – Klay Thompson.

Thompson holds the record for 3-point in an NBA game, netting 14 3-pointers in under 3 quarters against the Bulls in the 2018-19 season. He also has an explosive 37-point quarter to his name against the Sacramento Kings.

He’s efficient with his movement and barely jumps while shooting, giving increased balance to his shot. No wonder he’s racked up 1798 3-pointers in just 8 NBA seasons.

Duncan Robinson plays at the Shooting Guard or Small Forward position for the Miami Heat in the NBA, signing his name as one of the elite shooters in the league.

He’s shooting 44.8 percent from beyond the arc (4th in the NBA) and has made a total of 243 3-pointers (3rd). He is currently hoisting 8.5 3-pointers a night while knocking down 3.5 on the regular. He’s almost automatic from anywhere, able to come off screens and make 3-point shots in catch-and-shoot opportunities for the Heat.

Though his season-high for 3-point shots made in a game is “only” seven, he has 13 outings of five or more threes, including seven times with six or more.

From a hot youngster to an NBA veteran. J.J. Reddick once again features at the top end of the three-point list.

The former 76er has kept firing the three-ball like there’s no tomorrow since his switch to the Pelicans before the current campaign.

Currently sitting on 1884 made 3-pointers, the veteran needs 107 more to pass Jason Kidd at 10th place. This is a figure eminently within his grasp. Redick has a career 3-point percentage of 41.6%, good for 17th all time.

The younger brother of the Seth Curry household has made a name for himself for being one of the most proficient snipers ever to set foot on an NBA hardwood. Seth Curry’s thriving now with the Philadelphia 76ers, knocking down 2.0 three-pointers per game.

He made this list not because he has made so many three-pointers in his career but because of his insane accuracy: he’s shooting 44.3% from deep which ranks him #2 in 3-point percentage among players who made more than 200 threes in their career.

The 26-year-old made his NBA debut this year when Matt Thomas joined the Toronto Raptors from Spanish side Valencia, and he’s certainly made his mark.

The shooting guard only featured in 41 games for the Canadian franchise but shot an absurd 47.5% from deep—quite crazy numbers for an NBA debutant.

Thomas finished the 2019/20 season with a 47.5 percent three-point field goal percentage and made almost four (3.8) triples per game. Averaging only around ten minutes per game, he was still able to score 47 triples this year.

He totes one of the few pure three-point specialists builds in NBA 2K21. Many consider him to be the new Kyle Korver, as he’s one of the easiest shooters to use in the game.

Damian Lillard remains one of the best shooters in the league. He is one of three players in the NBA that takes double-digit attempts from the three-point range. Lillard is second to Curry in attempts (10.8), as well as makes (4.1). Lillard is shooting 37.9% from three, but he is another that creates many of his shots.

Rivaling Stephen Curry in deep threes, Damian Lillard can launch bombs from almost anywhere on the court, including half-court. Witness his twin 3-pointers from the half-court line during the 2021 NBA All-Star Game. He drained his last one to seal the win for Team LeBron in a dramatic fashion.

The Portland Trail Blazers guard has connected on at least five 3-pointers in a game an astounding 25 times, making six or more 14 times with a high of eight twice. With 16 games to go and an average of 4.1 makes from 3-point range per contest, Lillard is well on his way to eclipsing his career-high of 270 threes in a season.

If you want to take a look and play with all these talented shooters, you can get lots of NBA 2k21 mt coins on u4gm.com to let them join your team!